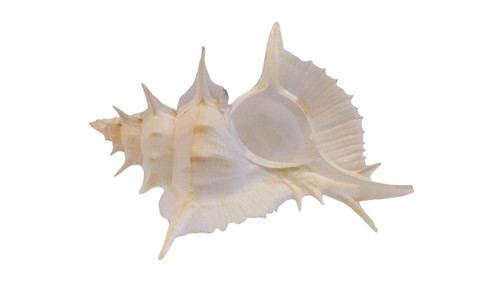 Murex are large, showy species living colonially on sandy mud flats. All murex snails feed on other mollusks, especially bivalves. Eggs are laid in clusters of capsules. Their earliest use of murex snails was as a source of dye and dates back to the days of the Phoenicians. In later years, the Romans and Greeks also used the valuable dye.

The murex snails secrete a yellowish fluid which, when boiled and treated, makes a permanent purple dye. Wool and cotton dyed with this so-called Royal Tyrian Purple brought very high prices. During Roman times only Senators and Emperors were allowed to wear purple cloth. After the fall of the Roman Empire the dye was used by the Christian Church and gave rise to the official colors of Cardinals. Many new towns were settled in the western Mediterranean by Phoenicians seeking fresh beds of the dye-producing murex shells.

These particular specimen's is Murex alabaster and measures approximately 4.5-5 inches in length