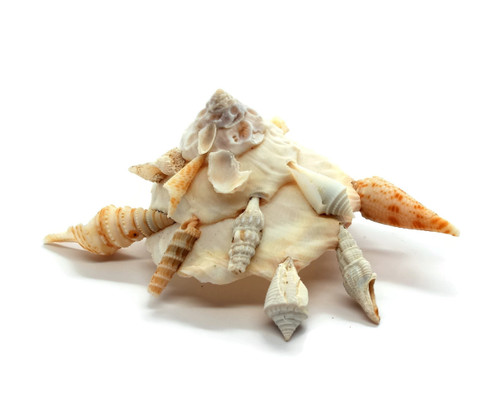 Carrier shell species is Xenophora Pallidula Reeve from the family Xenopnoridae. In short the name most often used is PALLID CARRIER. The Pallid Carrier is a thin fragile shell. Its upper surface has oblique vertical ribs, covered by shells and other debris. Carrier shells are delicate top shape shells that collect sea floor debris and attach it to their upper shell surface

The color is white to yellowish white. As the picture depicts the Pallid Carrier attaches sea debris and sea floor shells to its outer periphery. It like dwells in deep tropical seas from the Indo-Pacific rim to the Japonic sea area (near Japan). Some have been collected around the shores or South Africa.

Be aware some shells may have been glued to help support this very fragile shell but all shells are natural to shell not added.

Picture is a close resemblance to the one you will receive