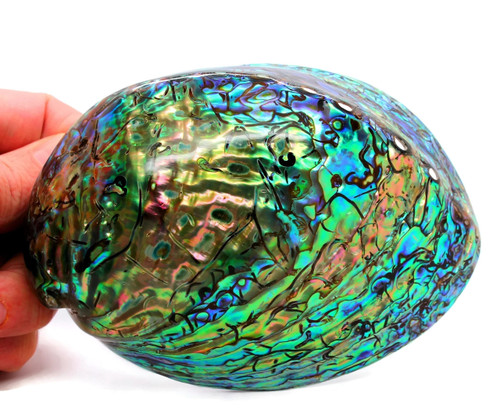 Polished Paua Abalone from Northern shores of New Zealand 5 to 6 inches. Paua Abalones in there natural habitat attach to rocks on the sea floor. They are pride off the rock and highly polished. The part of the Abalone that was attached will show some discoloring. Each shell is different and coloration may vary. Abalone are permanently attached to their shell in the center at a location called the muscle attachment. The Muscle atttachment produces a scar on most paua abalones.. The scarring is polished over and becomes part of the out side shell's striking color presentation.

The shell begins in the larval form and abalone can only add to an existing shell after their larval stage. If they are removed from their shell, without injury, they can remain alive but cannot make a new shell – nor can they reattach to their old shell if it has been removed. Abalone rely on their shells for protection, so an animal without a shell would be easily eaten by a predator in nature. Inside the shell, the location under the spiral is called the apex just as it is on the outside of the shell. It is under a small, hard shelf at the end of the shell. A portion of the abalone body rests in the apex but there is no substantial attachment here.