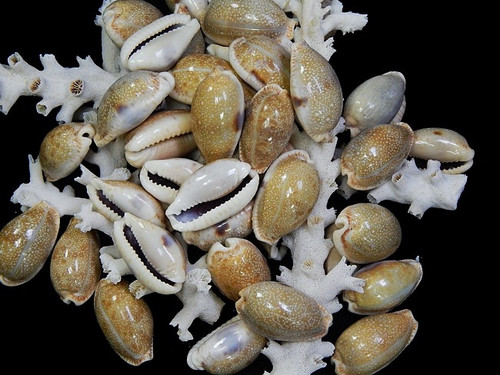 Cowry, also sometimes spelled cowrie, plural always cowries, is the common name for a group of small to large sea snails, marine gastropod mollusks in the family Cypraeidae. The word 'cowry' is often used to refer primarily to the shells of these snails. It is worth noting that a few species in the family Ovulidae are also often referred to as cowries, and in the British Isles the local Trivia species Triviidae are sometimes called cowries. These other two families are somewhat closely related to the Cypraeidae.)
Many people find the very rounded, shiny, porcelain-like shells of cowries pleasing to look at and to handle.
Cowries have historically been used as currency in several parts of the world, as well as being used, in the past and present, very extensively in jewelry and for other decorative and ceremonial purposes.