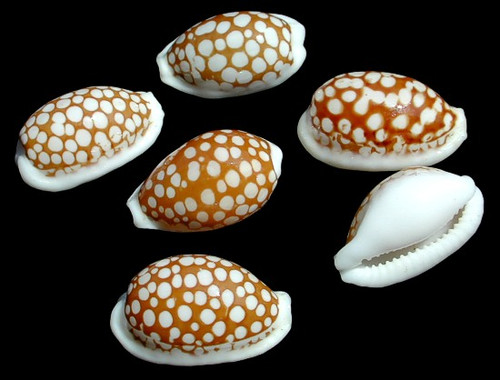 Cyprea shells or the more common name Cowry Shell are the most universally collected shells. They are prized for their colors, glossy surface and markings. There are approximately two hundred species. The most abundant are in the tropics.

In its first stage of growth the cowry develops a short pointed spire (a spire is the coiled part of the shell and it usually tapers to a point). As the shell grows the spire and its developing edge thickens. In its last stage of growth the edge thickens and it forms teeth along each side of the aperture (aperture is the opening at the front end of the shell). The basic shape of the Cyprea shell varies little. However, they vary greatly in size, color, pattern and the arrangement of the teeth along the aperture. Cyprea or Cowry shells are active at night and hide during daylight. They feed on algae near coral reefs.

You will receive one similar to the ones pictured