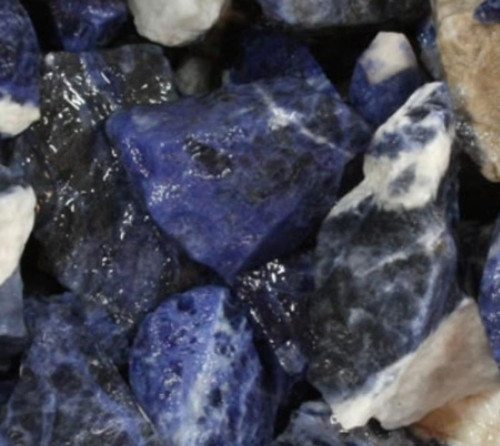 Specimens of Dark blue Brazilian Sodalite. individual specimens of natural rough material,each highlighted by thin white veins of Quartz, make this classic material. each boxed Myth & Lore: Fairly new to the cataloging of stones, Sodalite does not have an abundance of myth or lore attached to it.

What I have found, though, is that it has been labeled the "Stone of Truth", as it is said to make one speak the truth... not so much as in opposition to lying, but rather in its ability to help one clear any confusion and to distinctly get to the truth of a matter. Sodalite, like Lapis Lazuli, has also been called the "Wisdom Stone" as it is believed to foster wisdom, knowledge and communication thereof. Sodalite is often used by athletes, as the stone is said to aid and prolong physical endurance.