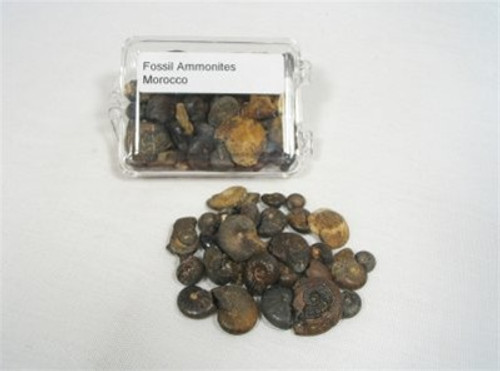 These marine animals had no vertebrae and were protected by a hard shell (usually coiled) made from calcium. Fast-moving predators, they ate other animals in the sea. These animals were protected by a shell (usually spiral-coiled) that contained many air filled chambers, called phragmocones; the animal lived only in the outer chamber. The opening of the shell is called the aperture.

The walls of each chamber are called septa; these walls were penetrated by a ventral tube like structure called a siphuncle that probably regulated the air pressure, allowing the ammonite to float. Ammonites ranged in size from under an inch to about 9 feet (3 m) in diameter When Ammonites Lived: Ammonites appeared during the Devonian and went extinct 65 million years ago.

The closest living relative of the ammonite is the chambered nautilus. Why Are They Called Ammonites?: Ammonites were named for Amun (also spelled Ammon), an ancient Egyptian god who is pictured as having ram's horns behind each ear (which look like ammonites).

Ammonites were common during the Mesozoic Era, but are not found after the Cretaceous period (when they went extinct).

This knowledge (and knowledge of when particular species of ammonites lived) helps date rarer fossils of unknown age. For example, if a new fossil is found in the same rock layer as an ammonite that is known to have lived only during the Cretaceous period, the new fossil can likely be dated to that same period.